AI Can Be Leveraged to Simplify, Enhance STT Services

AI Can Be Leveraged to Simplify, Enhance STT Services 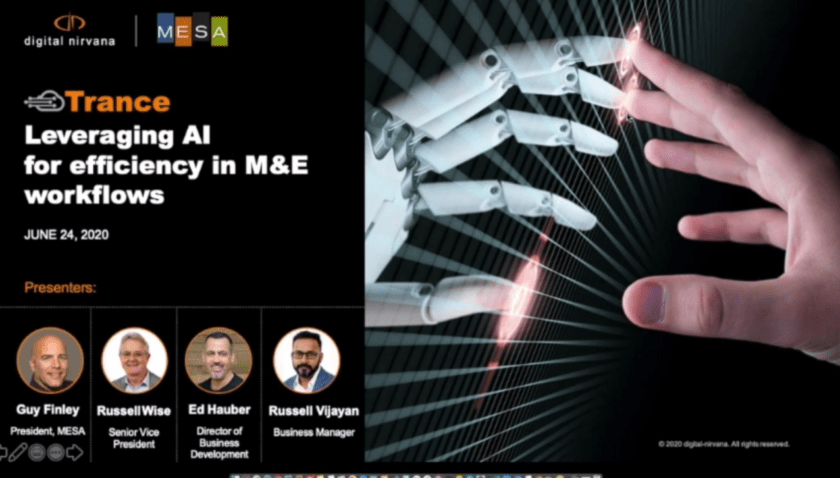 Artificial intelligence (AI) can be used by media and entertainment companies to simplify and enhance all of their subtitling, translation and transcription (STT) services in the cloud, according to M&E technology firm Digital Nirvana.

Digital Nirvana’s Russell Wise, SVP of sales and marketing, and Ed Hauber, its business development manager, used the June 24 webinar “Leveraging AI for Speed & Efficiency in M&E STT” to detail how Trance — the company’s enterprise-level, cloud-based closed captioning and translation solution — can simplify the process, as a managed or self-service STT tool.

Bloomberg, Turner and other major media organizations are already using the plug-and-play, AI-powered offering to produce captions at record speed, improving productivity by 50% and more, according to Digital Nirvana. The workflow can be used across the industry, with media, post and caption service providers all able to take advantage.

Trance is a “cloud-based, enterprise-level” Software-as-a-Service (SaaS) platform that is “used to generate automated transcripts, to create closed captions, to translate those captions into alternate languages and also to export captioned files in all known industry-supported formats,” Hauber pointed out.

“Trance is also fully web-based,” he noted, adding: “It’s accessible via a LAN, WAN or even a basic Internet connection. As an enterprise tool, Trance is fully configurable for an unlimited number of users, groups and roles.”

Administrators, meanwhile, can “manage multiple projects, they can create manage users, define roles and permissions, as well as establish system presets,” he said, while giving viewers a demonstration of Trance.

The Manage Presets section “gives users the ability to define caption attributes, such as the number of lines, the line length” and the total number of characters, he pointed out during the demo.

Digital Nirvana also offers an open application programming interface (API) to “integrate Media Services Portal directly into large enterprise media systems,” he pointed out. “Using our API, those operators don’t need to create a secondary workflow process to move media into and out of Trance — and this is a really big time-saving and productivity advantage of Trance,” he said.

The Trance speech-to-text engine “has created a highly-accurate transcript of the media that we just imported,” he also showed during the demo, noting that “eliminates the necessity of doing the manual transcribing of content and… delivers huge productivity gains over conventional transcription methods.” It is also “highly accurate — between roughly 90 to 95 percent accurate — based on good good-quality content,” he noted.

The transcript interface includes text on the right side of the screen and a media player on the left with intuitive controls to play back audio and video, he demonstrated. Also featured are tools that help provide fast text editing, including an auto highlight of potentially misspelled words and spell check, he showed. Users can also create captions in more than one language, he noted.

During the Q&A, he said: “Unlike other providers, we’re not limited to one specific speech-to-text engine. In fact, we, by design, do not operate that way. We constantly evaluate and measure the performance of all the best speech-to-text engines that exist in the marketplace today. And so, we’re not limited to just one. And the reason that that’s important is this technology is progressing and developing and advancing very quickly and so being tied to one or the other is inherently limiting. We would rather take the approach of using them all and continually measuring and evaluating them.”

There is a “great degree of accuracy that we can accomplish” by using that process, he noted.

Although Trance is “currently not a live captioning solution, he was quick to say: “It is on our roadmap and it is something that we’re actively developing. So, live captioning with the ability to run our speech-to-text engine, to collapse the time of that speech-to-text process down to near real-time, or essentially real-time, giving an operator the ability to make very quick edits …within a few seconds of live and be able to do that on the fly. That’s something that we’re evaluating and we’re working towards as the technology matures and there’s a degree of reliability and consistency that we can bring to the market that is on the roadmap for sure. Not today — but coming soon.”

He went on to point out: “We’re constantly developing the product…. This company really adheres to a philosophy and a down-to-earth principle in being very, very agile. And, as much as this is an enterprise tool, the product operates on a very agile basis, meaning it’s able to take and respond to customer requests very, very quickly.”

There is a “long history” at Digital Nirvana of “continual development and being very much in tune with exactly what the market wants and being able to deliver these expanded feature sets and new capabilities that don’t currently exist in the product today,” he added.